BUILT – The hidden stories behind our structures

Engineering is all around us – it’s an intrinsic part of our society. In her new book, QEPrize Ambassador Roma Agrawal explores how construction has evolved from the mud huts of our ancestors to towers of steel that reach into the sky. Below is an excerpt from the book, which is out now!

How is a sinking city being saved?

On the morning of 12 March 1993, I went to school in the Juhu district of Mumbai as usual, with my hair tied neatly back, wearing a crisp white blouse and grey pinafore. My teeth were hidden by braces, which were interwoven with my choice of green bands; definitely not cool (yes, even at nine I was already the class nerd). At 2.00 pm Mum picked up my sister and me in our lime-green Fiat and took us home. While she was parking the car, we raced up four flights of stairs in our daily competition to see who could make it to our front door first. But something felt different. We stopped at the last step; we couldn’t get to the door because our neighbour was standing there, nervously fiddling with her dupatta, looking distressed. We soon discovered why. While Mum was collecting us from school there had been a bomb attack on the Bombay Stock Exchange – the building where my father and uncle worked. Panicking, we ran into the flat and switched on the television. Every news channel was covering the mayhem. Bombs continued to explode around the city. Hundreds had been killed and injured. This was before the advent of mobile phones, so we had no way of knowing if my father and uncle were alive and safe.

The Bombay Stock Exchange is a 29-storey concrete tower in the heart of Mumbai’s financial district. A car carrying a bomb had made its way into the basement garage and then detonated. Many lives were lost; many more people were hurt. I stood in front of the television horrified, watching images of weeping people covered in blood and dust running from billowing smoke. Police cars, fire trucks and ambulances raced to the tower, sirens blaring. We could see that the offices on the ground and first floor nearest to the explosion had been destroyed. It was clear that no one in that part of the building could have survived. Dazed people from the higher floors clambered down stairs and out of the tower. At home, we looked at each other and didn’t utter a word, but I knew the same thought was running through all our minds. My dad and uncle worked on the eighth floor. We quietly hoped for the best.

As I learned later, my dad had been sitting at his desk, shouting down a poor phone line to one of his clients when a huge bang rattled the building. At first, he thought an electricity generator or a large cooling unit had exploded. He jumped out of his seat, telling his staff to stay calm and remain in the office. Seconds later, however, he heard terrified people running down the stairs. Many screamed that there had been a bomb and that everybody should get out as quickly as possible. My father, uncle and their colleagues left their office, to scenes of horror. Hundreds of people were filing down the stairs. There was barely any space to move. Head down, he focused on taking one step at a time, trying not to look at the dismembered bodies – the arms, the legs, the blood – that lay just beyond the staircase. Finally, he arrived at the ground floor. Emergency vehicles, trying to deal with the injured, blocked the street. My father and uncle fled the area and got on a bus to my grandmother’s house.

About two hours after we’d come home from school – the longest two hours of my life – Pop called us to tell us they were both safe. Years later, while studying for my masters in structural engineering, I attended a class in which we discussed how to protect towers against explosions. Suddenly, the events of that terrible day in March came rushing back. For the first time a thought occurred to me: given that it was rocked by a serious explosion right at the base of the structure, and fires broke out afterwards, why didn’t the whole Bombay Stock Exchange tower collapse? I know now that there are two main reasons for this.

The first is that engineers design certain buildings to resist explosions, so even if it is hit and damaged, it doesn’t collapse like a house of cards. There is a minimum standard of safety governing the design of all structures, but the more vulnerable ones – tall, iconic buildings, for example, or those with particularly large numbers of people inside – are designed specifically for a range of possible explosion scenarios. The second reason is that all structures should be designed to stop fires rapidly engulfing them, providing enough time for occupants to escape, and for the fire to be tackled or burn out – contained in a small area – before it causes significant structural failure. But we didn’t start out building this way; we have learned from disasters of the past. 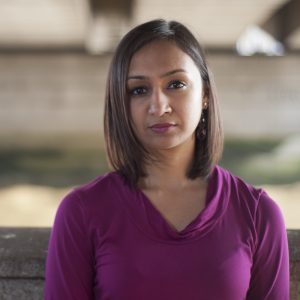 More on the author, Roma Agrawal

Ask an engineer – A live Q&A with Dr Larissa Suzuki

The QEPrize organised a special live Q&A with engineer Dr Larissa Suzuki for the pupils of St Christopher’s School for girls.

The QEPrize organised a special live Q&A with engineer Dr Larissa Suzuki for the pupils of St Christopher’s School for girls.