Cleaning our oceans with… magnets?

Photo by Shifaaz shamoon on Unsplash

In 2010, the United Nations General Assembly recognized access to clean water as a fundamental human right, stating that everyone around the world should be entitled to “sufficient, safe, acceptable, physically accessible, and affordable water for personal and domestic uses." The problem is, we need to overcome several challenges to realise that. Not only do we need to reduce access inequalities around the world, but we also need to stop polluting existing water sources and reverse the impact we’ve had thus far. Our continued use of hydrocarbons, for example – the primary components of substances like petroleum and natural gas – causes significant contamination of our fresh and seawater.

When you think of water contamination, you’ll likely cast your mind back to disasters such as the Deep Water Horizon accident, or the oil-covered birds as a consequence of the Exxon Valdez oil spill. But, in fact, the major daily risk of contamination stems from the large-scale production, improper handling, and consumption of oil-based materials. As the applications become more advanced over time, the chemical structure of the initial hydrocarbons become more modified and more complicated; this leads to a menagerie of crucial oil-based contaminants that are increasingly difficult to break down. It’s not just hydrocarbons wreaking havoc, of course; toxic polychlorinated biphenyls (found in old electrical equipment), dispersed polymers (micro- or nano-plastics) or the water-soluble herbicide glyphosate all negatively impact our water supplies.

Before we can hope to develop effective and sustainable solutions to reverse the contamination, we first have to address major challenges. First, the solution needs to be simple, reusable, and able to fully remove the contaminants from the water without adding further chemicals. Second, it needs to be flexible; the solution needs to act as a universal ‘toolbox’ that lets us treat chemically different contaminants, in different concentrations, from different wastewater sources.

Our new solution for removing oil from water is actually rather simple; it relies on a type of non-covalent interaction, whereby molecules are combined without sharing their electrons, called van-der-Waals interaction. In this solution, these hydrocarbons, joined by van-der-Waals interactions, are attracted to the surface of tiny ‘superparamagnetic’ nanoparticles. These single-domain nanoparticles become magnetically charged when an external magnetic field is applied to them, but they lose any net magnetisation once that field is removed.

The hybrid particles, referred to as ‘core-shell-nanoparticles’, are composed of magnetite (Fe3O4) or hematite (Fe2O3). You can imagine them as nanoscale, non-toxic “rust” about 30 nm in diameter which are sprinkled into oil-contaminated water. The benefit of operating at the nanoscale is that such nanoparticles exhibit a huge free surface area for the hydrocarbons to bind efficiently, and the chained molecules on the nanoparticles’ surface also provide an attractive point of interaction.

The concept works reliably and efficiently for various hydrocarbons, including crude oil. Each nanoparticle can remediate up to 14-times its volume in oil and can perform its function for multiple cycles. Crucially, the particles work in various water sources (tested in the lab and seawater) and at various temperatures [1]. By slightly modifying the chain structures we have also demonstrated that we can extend the scope of the concept to other contaminants such as PCBs, polyaromatics found in coal or tar, [2] and the aforementioned herbicide glyphosate [3].

Currently, the team is working to expand the application of the concept towards remediation of both toxic hydrocarbons and micro- and nanoplastics; a challenging engineering approach in that endeavour is to develop technical solutions that magnetically separate nano-sized objects from wastewater streams. As we work towards securing investors, commercializing magnetic water cleaning, and expanding its flexibility, we hope it will help people around to access to clean water more easily. 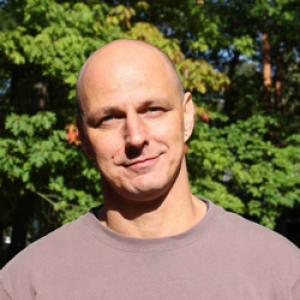 More on the author, Marcus Halik

Marcus Halik is a Professor at the Institute of Polymer Materials at the Materials Science Department of the Friedrich-Alexander University Erlangen-Nürnberg in Germany. He is a chemist by training with significant experience designing and engineering organic materials, nanomaterials, and hybrid systems.

The Queen Elizabeth Prize for Engineering is delighted to support a new initiative devised by teacher and author Alom Shaha entitled ‘A Month of Making’.

The Queen Elizabeth Prize for Engineering is delighted to support a new initiative devised by teacher and author Alom Shaha entitled ‘A Month of Making’.