Photo by Honey Fangs on Unsplash

People often associate engineering with bridges and buildings but, in fact, engineering is all around us. From sustainable coffee cups and people-powered pavements to new medical technologies, quantum computers, and the internet of things, there is a huge range of engineering wonders that we encounter in our day-to-day. The sheer variety of these innovations never fails to amaze me, but two of my favourites are an incredible paint called Inesfly, and a video game called MalariaSpot. Both of these – while entirely unknown to most – save thousands of lives from insect-borne diseases every year.

What if the paint in your house walls could protect you from infectious diseases and insects? Pilar Mateo, from the University of Valencia, Spain, has made that question into a reality. Dr Mateo, born into a family in the painting business and who holds a PhD in chemistry, combined these two aspects of her life to produce Inesfly, an infusion of paint with a slow-releasing insecticide (harmless to humans).When applied to a house, Inesfly reduces infestation by sterilising dangerous insects – preventing them from reproducing – and by killing any remaining eggs. This reduction of insects, in turn, helps to stop deadly diseases from spreading; applying Inesfly is like vaccinating the house instead of those who live in it. This is more effective and easier to implement than monitoring and treating whole communities. Inesfly combats insect-borne diseases, such as Chagas disease, across Latin America. In the region, between six and seven million people are currently infected with Chagas, spread by the Vinchuca beetle, which can lie dormant for years at a time. For lower-income residents, many of whom live in homes with mud walls, the risk of Vinchuca beetle infection is much higher. Buying a better-constructed house can help reduce the chance of infection, but not everyone has that option financially. Inesfly allows residents to protect their homes against these beetles at a lower cost without having to move or buy a new home. Pilar Mateo’s paint is also effective against ants, bedbugs, cockroaches, scorpions, spiders and ticks. Not only does it help prevent Chagas infection, but also other endemic diseases such as dengue fever, malaria, and Zika.

‘Vaccinating’ your house against malaria with paint is an extremely innovative approach to disease control, but what if you could also fight it while playing video games? Miguel Luengo is the creator of MalariaSpot, a game in which players help to identify parasites in real blood samples to diagnose patients with malaria. This ‘crowd-sourced’ approach to medical diagnosis helps to alleviate the pressure on doctors to find and treat the million people who die from malaria each year. The conventional diagnostic process for malaria consists of finding the number of parasites in a blood sample through lab testing – a lengthy and expensive process. MalariaSpot expediates the process by allowing players to identify parasites in samples through a video game, contributing to a joint diagnostic accessible from computers, smartphones, and tablets. The results are determined quickly, accessibly, and – for want of a more appropriate term – enjoyably, and they are shown to be almost as accurate as those of an experienced scientist. With the number of video game players steadily on the rise, MalariaSpot provides a novel example of how to adapt an existing social change to answer a serious social problem.

Innovation drives society forward. The United Nations General Assembly announced its 17 Sustainable Development Goals (SDGs) back in September 2015, and it is engineering innovation around the world that will help us to meet them. Stories of pioneering engineers like Pilar Mateo and Michel Luengo demonstrate that the everyday objects or actions we often take for granted can be reimagined to do the unthinkable. There will always be problems to solve and challenges to overcome, but the answers to them could be right in front of us. Engineering can help us to tackle social challenges and solve the world’s problems, and a career in engineering provides a varied and rewarding career of creativity, problem-solving, and innovation. 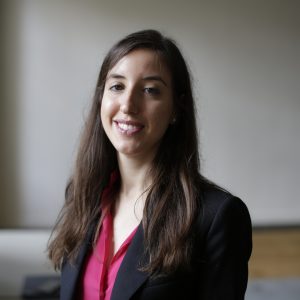 Carmen Zaragoza is an industrial engineer specialised in energy with a masters in renewable energy technologies. Passionate about the energy sector and its constant evolution, she works as a gas turbine global solutions engineer in an international company.