A novel way to 'pull' clean water from the sea

Photo by Matt Hardy on Unsplash

For everything from micro-organisms to flora, fauna, and human beings – clean and freshwater is essential. This is why, as the human population continues to grow, we need to make sure we meet the escalating global freshwater demand.

Even though we call earth the “blue planet”, with nearly 75% of its surface covered in water, there are signs of water scarcity across the globe. Water has become a pressing issue for several reasons: exploding population, climatic changes happening across the globe, and political factors, to name a few. Globalization and rapid industrialization have been arguably beneficial for humanity, driving countless opportunities for growth and development. But there is one major consequence of this rapid growth: pollution. The World Economic Forum (WEF), in its latest annual risk report, ranked a water crisis as a major global risk for its potential impact.

Annual assessments of the global water scarcity reveal that around four billion people lack access to drinkable water at least one month of the year, and half a billion people face acute water scarcity all year round. But it doesn’t stop there – water scarcity poses a severe threat to industries, affecting both production and supply chains. This global water scarcity ultimately boils down to the fact that only 3% of the total water reserves of the earth is fresh and consumable as is. Sadly, about 80% this freshwater is unavailable – locked up in the form of glaciers and ice caps in the polar regions. The whole of humanity relies on just 0.5% of the total planetary water reserve for survival.

Lately, in an effort to reduce the risk and consequences of acute water shortage, there have been several methods developed to harvest fresh water from different sources. Nature has always been a source of motivation for scientists and researchers. In arid and semi-arid regions, for example, the unique water harvesting abilities of certain cacti and desert beetles inspired the development of materials that emulate them. Based on these observations, biomimetic structures (synthetic structures that replicate those in nature) made from cheap metals such as copper and zinc, and surfaces that allow for easy water condensation, were created and deployed to scavenge fresh water. In hilly terrains, this lead to a whole new practice of harvesting clean water from the dense fog and dew.

At any given time, Earth’s atmosphere houses an astounding 37 quadrillion (or 37 million billion) gallons of water. That’s almost 10% of the total freshwater reserves on the planet. While the majority of open water bodies are either contaminated or saline, the air sitting directly above them is comparatively clean and moisture rich. Studies indicate that the amount of atmospheric moisture prevailing over the surface of oceans is rising by 0.41 kg/m2 every decade. This is a massive pool of vapour waiting to be tapped as a potential clean water source. Atmospheric water harvesting (AWH) with minimal expense of energy is listed by both the World Economic Forum and Scientific American as the second most impactful technology on people’s lives.

A Unique Material – The Water Magnet

The biggest challenge for AWH is finding a suitable material – it has to be able to absorb water from ambient humid air and release then release it, easily, with minimum energy requirements, powered by low-grade energy sources. Conventional materials like silica gel and zeolites are less than ideal for this process as they suffer from either low uptake of water or high energy requirement for its release. Promisingly, however, the hydrogel we developed at the National University of Singapore meets these criteria. It absorbs a lot of water (at least 400% of its own weight) and releases it at a relatively low temperature of 50oC. The transparent “hair-gel” like material is a slightly tweaked form of Zinc Oxide, a common non-toxic chemical found in everyday household items such as sunscreens and body lotions. Zinc Oxide has been used for quite a while, but this unique property had not previously been exploited.

In pure water, we found the hydrogel could absorb and retain more than four times its own weight. What’s more, unlike materials like silica gel or calcium chloride – common atmospheric–water-absorbing materials that form strong chemical bonds with the absorbed water – the hydrogel attaches itself very weakly to the water molecule, just like a water sponge. This makes water release a low-energy process, triggered at a relatively low temperature of 50oC. Exposing the hydrogel to natural sunlight for about 20 minutes causes it to expel all the absorbed moisture in the form of vapor, which can be condensed to get pure water.

On top of both absorption and energy requirements, a material’s stability over time is another important factor for water harvesting applications. A classic test for stability in this context is by repeatedly putting the material through absorption/desorption cycles until it can’t absorb any further moisture. In our testing, the team put the hydrogel through more than 1000 of these cycles and it still functioned well.

With that being said, more pertinent to this discussion than lab tests is how well the water magnet manages to pull pure water from real-world environments like the sea. As such, we designed and constructed an inexpensive device (a cross-section of which is shown below) using Styrofoam. At the bottom, the wet sponge provides a high ambient humidity required for the hydrogel to soak up with water. Over time, the region between the sponge and the hydrogel becomes highly humid – like the empty spaces in a half-filled bottle. The reason for this is the natural evaporation of water from open surfaces. Since this process happens naturally, the ocean salt does not vaporize alongside the water as it requires more energy to do so. The water “pulled” by the hydrogel from the ocean is therefore clean and void of any salt content.

Once the hydrogel becomes saturated with water, multiple stacks of these substrates are then transferred to a greenhouse box (shown below). Exposing the box to sunlight then causes enough natural heat build-up to trigger moisture release from the hydrogel. As this moisture encounters the glass enclosure, it cools and condenses as water droplets. This water collects at the bottom of the enclosure and is completely salt free and clean.

When this technique was tested in the lab we found we could collect about 14 liters of clean water using 1 kilogram of the magic hydrogel. We then conducted on-field testing of the designed floatation device to further bolster the sustainability of the technique, and the team is developing a second-generation version of this concoction to further improve this water yield. With the new formula, the team estimates that it will be possible to get around 45-50 liters of clean water per day.

Much like how floating photovoltaic panels help to generate power without occupying much space, this simple and low-cost method to pull clean water from the sea surface and open water bodies could help to reduce water crisis issues in remote areas of the globe. 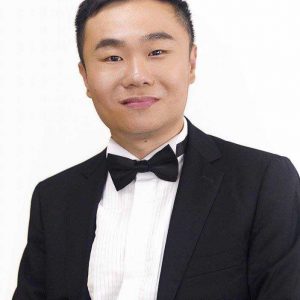 Dr Dan Swee Ching is currently an Assistant Professor at the Department of Materials Science and Engineering at the National University of Singapore.