Researchers from Swansea University have recently developed a new machine called the Matrix Assembly Cluster Source (MACS). Among a range of promising applications, it offers an environmentally-friendly way to treat water by destroying organic contaminants. We sat down with Professor Richard Palmer, who led the project, to hear more about MACS, how it works, and the potential impact it could have in the future.

Tell us a bit above yourself?

I left my hometown of Swansea for Cambridge at 18, but I retained my links over the years and came back in 2017 to the University’s amazing new Bay Campus (with its own sandy beach)! I started my career in physics, but recently moved into engineering at Swansea’s IMPACT Institute. It’s a great environment to explore the applications for the new materials we are making with the new method we have developed.

What is MACS, and how does it work?

Well, for a bit of context…

In the early 1980s, instruments were designed to generate a beam of very small, multi-atom particles called clusters. Not long after the introduction of these ion beams was the discovery of “magic numbers” – particles of special sizes that have unusually stable geometric structures – in noble gas and metal systems. A particularly famous discovery was the C60 cluster in 1985, an exceptionally stable cluster of sixty carbon atoms shaped like a soccer ball.

Researchers soon realised that a beam of these clusters – nanoparticles, essentially – could be fired (or “deposited”) in a vacuum chamber onto a substrate to create a thin film of nanostructured material. The first of these cluster deposition experiments were also conducted in the 1980s, but the field took off in the 1990s when these nanostructured surfaces were recognised as model catalysts for chemical reactions, as well as tools for fabricating nanostructures, and capturing biological molecules. We exploited the protein-capture concept to create biochips – miniaturized laboratories able to detect multiple bio-marker molecules simultaneously. We’re currently using these chips to undertake large-scale patient trials of a breast cancer blood test.

A known problem with the cluster beam approach, however, is the limited intensity of the beams. In many cases, the consequently slow rate of deposition restricts their usefulness to research studies. The challenge of scaling up this type of technology led us to the Matrix Assembly Cluster Source (MACS).

How did you come up with the idea?

The most common kind of cluster beam source machines works by bringing atoms together to form clusters in a gaseous state, while surrounded by a chemically inactive coolant gas (such as Argon). It is essentially a gas condensation process, in the same way that your breath condenses on a cold day.

MACS is different, and the new technological ideas behind it were twofold. One was to replace this dilute coolant gas matrix with a frozen, solid matrix containing the atoms designed to make the cluster.

Using this solid matrix leads to more efficient cooling and, as a result, a more efficient cluster formation. The second idea was to drive collisions between these atoms with an ion beam, rather than simply allowing natural, thermally-driven collisions to take place. If you irradiate the frozen matrix with an ion beam, you can create a cascade of collisions between the atoms, forming clusters which then eject from this matrix – essentially ‘projecting’ the clusters onto the substrate. It’s important to note that these cluster atoms need to come together in the presence of the coolant atoms to assemble the cluster. These two ideas together make the MACS concept.

Since 2012 we have been lucky enough to get support from several bodies – the Leverhulme Trust, EPSRC and Innovate UK, as well as the IMPACT project itself – to develop a MACS prototype or two and then develop a series of improved practical instruments; we are currently on the MACS Mark 3. The current instrument in Engineering at Swansea scales up the rate of cluster production by 5 to 7 orders of magnitude above the baseline, and enables the production of gram-to-kg quantities of catalysts based on clusters deposited from the MACS beam. The clusters themselves make up about 1% of this weight.

There are three principal reasons why the MACS technique is promising for manufacturing applications. One is that the technique is free of solvents. Nanoparticles are usually made by chemical methods; these are powerful and scalable, but they employ solvents and therefore generate waste products that you have to dispose of. As the MACS process is contained in a vacuum chamber and generates minimal waste, it is, therefore, more environmentally friendly.

Secondly, the technique is precise. The clusters generated and deposited are bare, without ligands that can inhibit their performance, and rather free of contaminants, too. The composition of the clusters can be chosen with care, whether just one element or two – or, perhaps in future, more complex combinations of atoms – based on the atoms that are dispersed in the matrix. The size is also well controlled, in the 1-nanometre regime.

Thirdly, the beam of clusters can be deposited onto all kinds of supports. For catalysts, we typically deposit the beam onto a powder while it is being stirred in a cup placed inside the vacuum chamber. But clusters can equally be deposited onto a variety of other surfaces; it should be quite straightforward to implement processes that decorate large surface areas with clusters.

Of course, we do not expect an innovation like the MACS will quickly displace well-established methods of materials synthesis, for catalysis or otherwise. But we are at a stage of the R&D now where we can work with industrial partners and collaborators to explore the specific applications in which the versatility, precision, and green credentials of the MACS technique bring the most benefit.

What applications does MACS have?

The main application we have demonstrated so far, at the industrial R&D scale, is the creation of catalysts. Heterogeneous catalysts, where the catalyst is a solid and the reactants and products are molecular; and electro-catalysts, which accelerate electrochemical reactions, are examples of this – they nearly always consist of particles about 10 nanometres or smaller in size, and are dispersed on a suitable support such as an oxide. Nanotechnology (and the MACS in particular) provides new approaches to the precise formation of supported catalyst particles.

We have demonstrated two kinds of reaction with the MACS to date: generating molecular oxygen using cobalt clusters as catalysts – one component for a sustainable way to split water molecules and create hydrogen fuel, and the catalytic enhancement of water treatment by ozone – using silver clusters as a catalyst to destroy organic contaminants. These add to previous examples of catalysis realised by clusters produced from various cluster beam sources which, crucially, were also conducted under realistic reaction conditions.

But while catalysis is a great example of the potential applications of producing nanoparticles at scale using the MACS, we can also envisage a series of different applications. For example, we are beginning a project aiming to enhance the response of gas sensors by decorating them with clusters, and another project with the University in Grenoble on light-emitting quantum dots – a class of semiconducting nanoparticles key to future optical (and electronic) devices – created by embedding semiconductor clusters into polymer films.

The whole idea of incorporating clusters into nano-composite materials has a lot of promise. And then there is the possibility, in the longer term, of using clusters to capture proteins in label-free diagnostic biochips, or making multi-functional clusters for cancer therapy with MRI imaging.

Do you foresee any challenges ahead?

I think the latest MACS has taken the production rate for clean and precise nanoparticles to a reasonable level for technology R&D – approaching a gram of nanoparticles per hour. That leaves two main kinds of challenges.

One is integrating the clusters into different forms of advanced materials, and investigating the properties of these nanocomposites. Beyond the functional demonstration lies the economic cost-benefit analysis, of course.

The second challenge is to further scale up the MACS to a level suitable for manufacturing of products, perhaps to a rate between 1g and 100g of clusters per hour. One barrier to reaching this level (and above) is the cost of the matrix cooling, which uses a closed-cycle helium gas process at around 10 degrees Kelvin (about -263 Celsius). The cost of cooling rises as the production rate rises, and so, for this reason, we are exploring the use of a matrix that can function at liquid nitrogen temperatures – about 80 degrees Kelvin (or about -193 Celsius), where cooling is much cheaper. That work is at an early stage, but I can also imagine a factory of MACS machines operating comfortably in parallel to manufacture functional materials, rather than pushing a single machine to the ultimate limit. 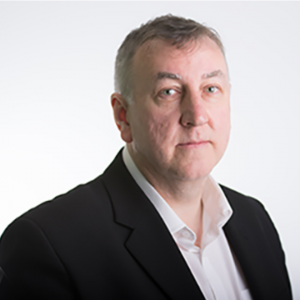 Richard is Head of the Nanomaterials Lab in the College of Engineering at Swansea, his hometown, and also Professor in the School of Physics of Nanjing University, China. His research on atomic clusters includes fundamental studies of atomic structure and dynamics as well as scale-up. Other well-established research topics include atomic manipulation in the STM and semiconductor nanofabrication.