Self Driving is Being Held Back

Ask anyone in the automotive vehicle industry how long it will be before truly driverless cars are on our roads, and you’ll hear anywhere from five to 50 years. The industry has been accelerating since the first DARPA Grand Challenge in 2004, which birthed companies like Waymo and Velodyne who now lead the way. The race is on to provide the first commercially successful services using driverless vehicles.

Having invested billions worldwide in the research and development of autonomous technology, companies everywhere are hitting the barriers to actual deployment on public roads. Projects are stuck in the research phases and proof of concepts, floundering in the maze of international standards and new regulations from governments that are only now starting to understand the required safety levels for this constantly evolving technology.

The Connected and Autonomous Vehicle (CAV) industry widely agree that the self-driving car is the most complex system challenge humanity has ever tried to solve. It’s a challenge that we won’t be able to solve without leveraging the power of community, and working together in wider-reaching ways than ever before.

My drive for becoming an engineer has always centred around competition. I’m a firm believer in forcing the acceleration of technology by pitting teams against each other and challenging one group to be better than the other. Formula One and the world of motorsport is one of the best examples of this, bringing the world innovations like seat belts, electronic driver aids, and safe crash structures.

Working to create a driverless racing series in 2018 at Roborace as a systems engineer allowed me to explore how autonomous technology can be developed under the pressure cooker of competition. The teams would all race using the same vehicles (the hardware) but their own virtual ‘drivers’ (the software).

Researchers could finally start applying their algorithms – from localisation and mapping to machine learning and controls – to real cars on real tracks. Racing cars are designed to find the limits of driving, be it human or AI, and it is this principle that allows for the most rapid development of technology. Having successfully held autonomous races for the first time, the positive results from Roborace Season Alpha were clear, and teams such as the Technical University of Munich (TUM) published their code as open source so that anyone around the world can explore their algorithms for free.

The principle of open-source software started with the pushback against tech companies becoming too large. To combat Microsoft’s huge power in the industry, a new operating system called Linux was developed and released for free in 1991. ‘Enterprise’ editions followed such as Red Hat, allowing customers to pay for upgraded features and support, and the open-source business model was born.

Open-source software exists only because of passionate communities. Global collaboration on these scales (for reference – over 400,000 people have downloaded libraries from the Robot Operating System (ROS), one of the largest open-source robotics projects in the world) allows innovation to blossom while ensuring software is usable across a huge range of applications.

The self-driving vehicle industry will need open source principles if it wants to succeed. The problem is too large and too complex to be solved by one set of people; warning signs are there already, like racial bias in perception algorithms or serious safety errors leading to deaths.

Open source projects provide both the diversity of contributors and a range of physical landscapes and applications for autonomous vehicle software to truly thrive. One solution in the deserts of Australia can be shared with developers in Hong Kong and together everyone moves forward to create robust, reliable and safe software: the only viable option for commercialisation.

This goes beyond just the vehicle too; data from autonomous vehicles is such a valuable resource as it provides the training for future software. The vehicle can learn from hundreds of thousands of hours of other’s mistakes so, if this data could be made available to everyone, then progress and innovation can flourish more quickly. CAVs all need to speak the same technology language if a truly connected system of transport is the goal.

As Lead Product Development Engineer at StreetDrone, I help manage the long-term strategy for our technology – setting roadmaps for the engineering and commercial teams and setting out our vision for creating products.

We strongly believe in open source, so we’ve been excited for the past few weeks to help launch a new open-source software stack called Project Aslan. As founding members, we’ve contributed much of the self-driving software stack we’ve developed over the last few years and are hoping to sow the seeds of a new community.

As an engineer, I believe it’s my duty to help train the next generation. Open source projects are becoming the norm for new software engineers, and industry can support this essential trend and encourage free-for-all approaches using outreach.

Even though the cars I work on now are much slower than the 250kph Roborace Devbots, my love for motorsport hasn’t left. 2020 has been my second year as Head Statics Judge for the Formula Student AI (FS-AI) competition. Teams of university students from all around the world come together (virtually, this year) to compete with their software stacks using small single-seater racing cars. While the teams fight hard to win, there is also a concrete foundation of collaboration, with teams like Edinburgh University leading the way in open sourcing their simulation models so future teams can build on their technology. A rising tide floats all boats, after all.

Perhaps through the current COVID-19 pandemic, the world can be reminded that the most complex problems need to be solved through collaboration. Open-source software and community power can together bring commercially viable self-driving solutions to our road, a little sooner than we think. 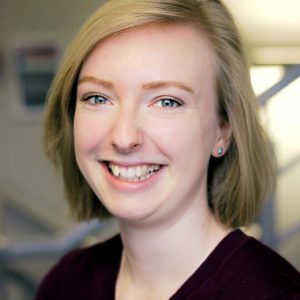 Holly Watson Nall is currently Lead Product Development Engineer at StreetDrone, an ambitious start-up based in Oxford that specialises in system integration for autonomous vehicles. She is also the Head Statics Judge for the Formula Student AI (FS-AI) competition held at Silverstone every year. If she is not working on an exciting new project, she is usually hunting for good coffee shops.